Praise be to Allaah.

Witr prayer is one of the greatest acts of worship that draw one closer to Allaah which the Muslim should observe regularly and not neglect.

The Prophet (peace and blessings of Allaah be upon him) said: “Allaah has prescribed for you a prayer (by which He may increase your reward), which is Witr; Allaah has enjoined it for you during the time between ‘Isha’ prayer until dawn begins.”

(Narrated by al-Tirmidhi, 425; classed as saheeh by al-Albaani in Saheeh al-Tirmidhi.)


The minimum number of rak’ahs for Witr is one rak’ah, because the Prophet (peace and blessings of Allaah be upon him) said: “Witr is one rak'ah at the end of the night.”


And he (peace and blessings of Allaah be upon him) said: “The night prayers are two (rak’ahs) by two, but if one of you fears that dawn is about to break, let him pray one rak’ah to make what he has prayed odd-numbered.”


If a person limits himself to praying one rak’ah, then he has performed the Sunnah. But Witr may also be three or five or seven or nine.


Excerpt from : Islam Question And Answer
Posted by Cheqna at 9:30 PM No comments:

In the name of Allah the Most Gracious the Most Merciful

All praise is due to Allah alone. And prayers and peace of Allah be upon the last Prophet S.A.W.

It is narrated on the authority of Abu Dharr (may Allah be pleased with him) that the Messenger of Allah (prayers and peace of Allah be upon him) said:


And it is narrated on the authority of Buraida (may Allah be pleased with him) that he heard the Messenger of Allah (prayers and peace of Allah be upon him) says:

“Everyone has three hundred and sixty joints, so he has to give charity for each one of them.” It was said (to him): “O Messenger of Allah, who can afford that?” “You can bury the mucus that you may find in the Masjid, or remove stumbling block from people's path. If you could not afford that, then two Rak’as at Ad-Duha (forenoon) are enough” The prophet s.a.w replied.

[Reported by Ahmad and Abu Dawûd and Authenticated by Al-Albani]


It is an optional prayer that is performed between the full rising of the sun (15 to 20 minutes after sunrise) until it ends approximately 15 minutes before Dhuhr prayer.

And it is better to pray it when the heat of the sun reaches its highest grades, because the Prophet s.a.w says:

“The prayer of those who are penitent is observed when your weaned camels feel the heat of the sun.”


The ruling is that Duha prayer is a sunnah mu’akkadah (confirmed Sunnah), which entails massive rewards and blessings if established, but there is no sin on the one who leaves it.


The minimum of Duha prayer rak'ahs is two rak'ahs, because of the saying of Abu Hurayra: “My companion (prayers and peace of Allah be upon him) has advised me to do three things” and mentioned among them “Two Rak’as of Duha prayer.”


And it is said that there is no maximum number of Rak’as for it, because ‘A`ishah (may Allah be pleased with her) said: “The Messenger of Allah (prayers and peace of Allah be upon him) used to pray Duha prayer four Rak’as and then increases as Allah wills.” [Reported by Muslim]


There is nothing clearly authentic narrated about the sūrah to read after surah al-Fātihah. The Shāfiʿi opinion is to recite surah al-Kāfiruun in the first rakʿah and surah al-Ikhlās in the second rakʿah, due to the massive rewards of reciting both surah.


Sayyidina Abu Hurayra (Allah have mercy on him) narrates that my beloved companion (the Messenger of Allah, prayers and peace of Allah be upon him) advised me three things: To fast three days of every month, to perform the two rak'ahs of Dhuha, and that I perform my Witr before retiring to bed.(Sahih al-Bukhari: no: 1981)

Note to self : May Allah SWT grant us the chance to pray Dhuha habitually, give us HIS blessings and protection always...aamiin.

Posted by Cheqna at 9:00 AM No comments:

Articles and videos found on the net and youtube compiled in this blog are meant for reminders and my easy reference. Hope it can be beneficial to others too. May Allah SWT bless the persons involved in everything to make this compilation possible. 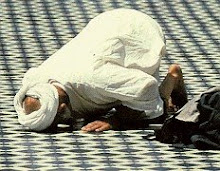 (Please click the photo to search for Qiblah direction)

Ash-hadu an-laa ilaaha ill-Allah (I witness that none deserves worship except God).

Ash-hadu an-laa ilaaha ill-Allah (I witness that none deserves worship except God).

Ash-hadu anna Muhammad-ar-Rasul-ullah (I witness that Muhammad is the messenger of God).

Ash-hadu anna Muhammad-ar-Rasul-ullah (I witness that Muhammad is the messenger of God).

Saying of the Prophet Muhammad (Sallallahu-alaihi-wasallam) :

"The example of the five prayers is as the example of an abundant flowing river by the side of the door of one of you. He washes every day from it five times."